Our Missions Ministry Team manages our regular giving and other fund raising and support events. Contact Verna Houghton  for more information. The organisations we donate to as a church at present are Yeldall Manor, FAITH (both local), London City Mission and Tearfund (wider world). These and charities we support by other means are listed below.

What is Fairtrade, and what does it mean to us?

Our church has Fairtrade status. This means we:  We made these promises to the Oxford Diocese in 1999, and to the Fairtrade Foundation, which was born in Oxford in 1994. God keeps His promises to mankind and made us in His image. It follows that we should keep ours.
Fairtrade Fortnight runs from the last Monday of February to the first or second Sunday of March (8th March in 2015). In past years we have focused on coffee, tea, bananas, cotton and jewellery. In 2014, we ran a quiz for our Pathfinders. Finn Wyatt won the first prize - an inflatable banana! We also sell the Meaningful Chocolate Company's Real Easter Eggs.  In November, we sell their Advent calendars alongside the Tearfund Christmas cards. 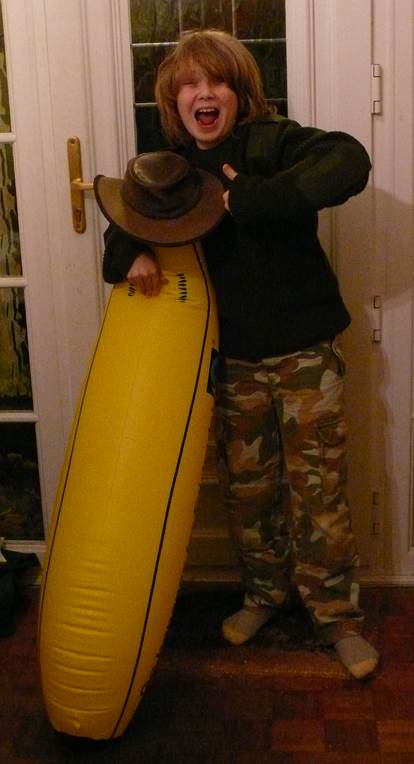 Has it occurred to you that Jesus Christ cares that we shop responsibly? He said: 'So in everything, do to others what you would have them do to you' Matthew 7: 12 and Luke 6: 31. He also asks us to love our neighbour. 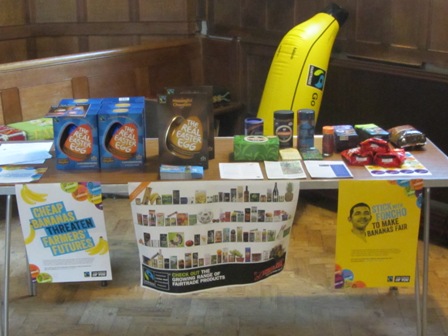 Fairtrade guarantees a fair wage, decent working conditions and terms of trade for suppliers and their workers, the means for them to educate their children, and local sustainability, for example through hydroelectric power and eco-friendly farming.

You can buy Fairtrade groceries and clothes at True Co-Op and the RISC Shop and Global Cafe in Reading, and groceries in all good supermarkets. A reliable local jewellery supplier is Kaanaanmaa in Wokingham. Dedicated suppliers of Fairtrade clothes include Kool Skools (school clothes), the Fair Corporation, Calico Moon and the Fairtrade Warehouse. High Street department stores such as Debenhams and Marks & Spencer also stock Fairtrade clothes. Levi Strauss manages an ethically responsible supply chain without Fairtrade certification. I have no hesitation in recommending them, but be careful. Many claims that goods are fairly traded are deceptive. The blue, black and green Fairtrade logo is the best guarantee.

Here’s a simple guideline: buy local, think of the planet and buy ethically traded goods. 2 out of 3 is usually possible whenever you shop.

David Kereto and the Raindrop Project

October 10 2010 saw the launch of this exciting new project at St Mary’s. It featured a sale of donated food items from kitchen and garden, so many thanks to all who brought and bought.

After our Harvest celebrations giving thanks for all that we are blessed with in Wargrave, the Harvest Raindrop Project focused our attention on another part of the world where lack of access to fresh water causes hunger and disease.

The project aimed to raise £5,000 over the next twelve months for a borehole in Kenya . The money raised was to be given to the Maasai Evangelistic Association which has a goal of drilling more than 50 boreholes in the most desperate areas of Maasailand.

The Revd. David Kereto from the Association visited St Mary’s in November 2010. According to David:

“A well becomes a fountain of life for the entire community; becoming a beacon of hope in the midst of desperation. It not only brings clean water to thirsty mouths, but also brings the living water to thirsty souls.”

There was an opportunity to meet with David after the service to learn more about the work of the Association.

Although the project was led by the young people and children,  everyone took part by collecting their spare silver coins in a jar and bringing them to the monthly family service. The plan was for lots of small contributions to add up to something bigger – just as raindrops accumulate to form rivers. The local schools and community also got involved in the project.

A concert on Saturday March 5th 2011 featuring choirs from local primary schools and special guests The Bourne Valley Singers raised over £1000. A Quiz Night on 12th November that year raised a further £1,350, bringing the total to £6,173. On Sunday 4th December 2011 the children talked about the project and presented a cheque to Revd David Kereto at a celebratory family service followed by a bring & share lunch. You can hear David's talk here. He has made follow-up visits to the Parish in November or December every year since then. His talks are in our Recorded Sermons archive under the Meeting tab.